⚕ Regarding my health: I got some good news from my oral surgeon yesterday. Although I have tremendous bone loss in my mandible from the keratocystic odontogenic tumor, the panoramic x‐ray taken yesterday showed the first signs of slow but significant bone tissue regrowth compared to the image from three months ago. At that rate, he estimated another six months to a year before the final surgery to cut out the tumor. (The bad news is that he’s moving on to another institution and I’ll be assigned another surgeon in the new year.)

👅 Regarding language: Two other surgeons, both Jewish, were also looking at the radiographs, and the older one used a Yiddish expression that the handsome younger one, bedecked in a kippa, did not understand. (Unfortunately, I missed the expression itself, only paying attention once I heard them discussing the Yiddish language.)

Also, I don’t associate the neighborhood with Semitic languages but rather with Indo‐European and Sino‐Tibetan ones; however, another attractive Semitic man was talking emphatically in Arabic into his mobile telephone on 82nd Street and then a couple sitting next to me in the hospital waiting room were talking in Arabic as well.
Published by Elyaqim Mosheh Adam at 21:32 No comments: Links to this post 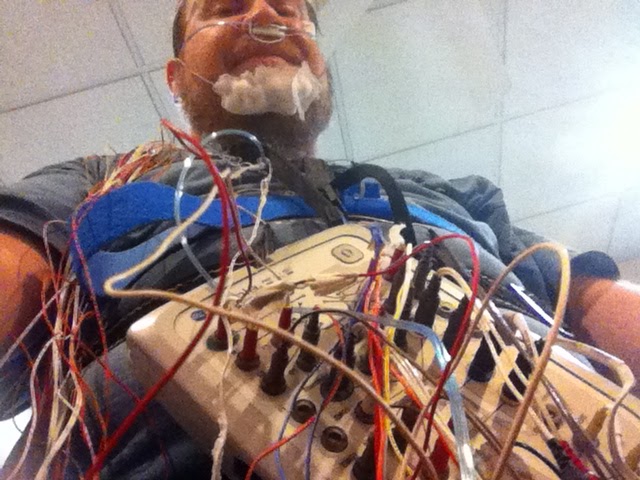 ➡ I had a sleep study 6–7 October but am only now telling the story.

◦ Although I had been told that if I didn’t show up for the test or if I canceled it too late I’d be charged two hundred dollars, I had been told little else about the sleep study in advance. For example, I had not been informed ahead of time that I’d have a private room in which I’d be able to change clothing, so I wore loose clothing in which I intended to sleep.

◦ The technician attached a tremendous number of polysomnography wires to me, mostly to my head, some of which were fed down my shirt or my trousers leading into a box that looked like a telephone switchboard.

◦ I had been assigned a room soon after I’d arrived, but after all the wires were attached, I was instructed to sit and watch television for a number of hours before the test would begin. (I watched Antiques Roadshow.) Although I had access to a toilet and to drinking water, I was expected to be at the clinic many hours without having access to any food.

◦ When the time for the test finally came, I got in bed and the technician spoke to me from another room, apparently testing the connections: “Look to the left. Now look to the right. Now move your left leg. Now grind your teeth. Now slower.” We went through the same routine in the second part of the test and I didn’t understand why grinding my teeth was the only thing I needed to do at two different speeds until I realized she had not said “Now slower” but had instead said with an accent “Now snore.”

◦ I wasn’t allowed to sleep on my belly, the position that allows me to breathe most easily when horizontal, but only on my side or back, so I had some difficulty falling asleep. Eventually, I got into some pretty good dreaming but the technician abruptly walked in to begin part two of the test.

◦ She fitted me with a CPAP mask and left the room again. I was on my back the rest of the time, so I had to strive to keep my mandible forward in order to breathe properly, and I actually felt myself stop breathing a few times before finally falling asleep. Needless to say, because I was in a position in which I have some difficulty breathing even when awake, and because I only had about half the night remaining, I didn’t sleep very much. At the setting used, the CPAP machine seemed to have at most a negligible positive effect. I thought the technician might occasionally enter the room and alter the CPAP pressure but she did not.

◦ After barely sleeping the entire night, I was awakened in the morning, given a survey form to fill out and then discharged. Despite the conductive gel still in my hair, one of my first priorities when back in my home neighborhood (after running into a number of friends) was to eat.
Published by Elyaqim Mosheh Adam at 08:31 No comments: Links to this post

📷 Celebration of Sigd in Jerusalem.

📆 PikiWiki Israel 15508 Sigd Jerusalem, photograph by Yehudit Garinkol, 24 Nov. 2011, under a Creative Commons license.
Published by Elyaqim Mosheh Adam at 18:31 No comments: Links to this post

Sunday at the Ethical Humanist Society of Queens, we were joined by Richard L. Koral from the American Ethical Union and the Ethical Culture Society of Westchester who also joined us for our monthly luncheon thereafter at Jax Inn.

Six Exotic Jews group members also gathered Sunday for an “Exoticon” in Upper Manhattan. We met at General Grant National Memorial where Ariel emphasized Grant’s racism by reading aloud General Order Nº. 11 and then spitting on the site. (See the video.) A British tourist inquired about it, and after explaining, a number of us eventually got onto the topic of libertarianism (and their implying that we were a group of libertarians annoyed me because we are not, but rather a Jewish cultural group). There was also a large group of adolescents there rehearsing a dance routine.

After briefly visiting Sakura Park, those of us who were hungry got food from a local supermarket and we sat, talked and ate on public benches. Then we went to Riverside Park which was really gorgeous and we located what we believe is the Freedom Tunnel. Then came rehydration and dessert at other local venues and more talking and sitting on benches. Afterwards, we rode the subway together to Times Square and then little by little separated from one another as our paths diverged.

While waiting with one of them in Jackson Heights for his bus, our topics turned unsurprisingly towards linguistics (Arabic ligatures, and why the letter jim is a moon letter even though it’s usually coronal).

Published by Elyaqim Mosheh Adam at 21:30 No comments: Links to this post 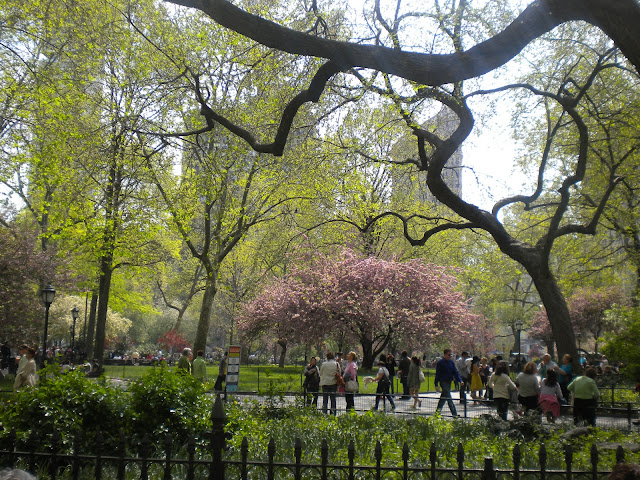 My current cover photo/header photo on the social networking sites.

Published by Elyaqim Mosheh Adam at 08:45 No comments: Links to this post

How does Eliyyahu (a.k.a Elijah/Elias) manage to get to absolutely every Passover seder? Why it must be with his chariot of fire drawn by horses of fire (rekeb ēsh wə‐sûsê ēsh רכב אש וסוסי אש)! The Greeks identified Elias with the sun god Helios due to a superficial similarity in their names and in their conveyances (although their names are etymologically unrelated, אליהו Ēliyyāhû being Afro‐Asiatic and Ήλιος Hēlios Indo‐European), and Eliyyahu is frequently portrayed in a fire chariot not unlike Helios’ sun chariot.

This is a detail of a fresco in Rila Monastery, Bulgaria, portraying Eliyyahu (Saint Elias) and his chariot of fire (from a larger picture on Wikimedia, in the public domain).

[I]t is easily seen how, by a scarcely perceptible change of sound, the great god Helios could be transmuted into Elias. Helios drove round the world in his fiery chariot, drawn by horses. Elias went up to heaven in a similar conveyance. Helios produced rain and storm, and so did Elias by the fervor of his prayer on Mount Carmel. Elias brought down fire from heaven and so did the great sun‐god. Hence the parallel between the two was too tempting to be passed over.

Published by Elyaqim Mosheh Adam at 19:56 No comments: Links to this post

The song playing at Foodtown was “Overcome,” by Jon Egan, as presumably performed by Jeremy Camp. (“Savior, worthy of honor and glory …/Jesus, awesome in power forever/Awesome and great is Your name….”) In Original American Chicken the following day, they were playing “I Get a Kick Out of You,” by Cole Porter as sung by Ella Fitzgerald. Guess where I felt more comfortable.

Published by Elyaqim Mosheh Adam at 04:19 No comments: Links to this post

An openly gay Buddhist monk was our returning guest speaker Sunday at the Ethical Humanist Society of Queens speaking on meditation, a beneficial practice wherein Humanists should feel appropriate participating. He gave a good presentation but said a few things so abstract I couldn’t quite grasp them and a few other things with which I disagreed, one of which was his apparent belief the mind is not just a result of brain activity and saying Buddhists believe the mind is in the heart rather than the brain. He also repeatedly used the phrase food store instead of market or grocery.

Published by Elyaqim Mosheh Adam at 21:55 No comments: Links to this post

Happy New Year! Today is the first day of the month of Nisan (and thus New Year’s Day) on two different calendars.

In many cultures, including many Near Eastern cultures, the year begins in springtime (March–April in the Northern Hemisphere) rather than wintertime (January–February).

Levantine, Mesopotamian and Anatolian peoples (specifically the Assyrian, Jordanian, Iraqi, Kurdish, Lebanese, Palestinian, Syrian and Turkish peoples) replaced the names of the Gregorian months with names from the Babylonian calendar, and so April is called Nisan (نيسان، ܒܢܝܣܢ) and Assyrians celebrate 1 Nisan (called Ḥad bi‐Nisan ܚܕ ܒܢܝܣܢ) as the first day of the year.

The Hebrew calendar (or at least the predominant one used by Jews from the Rabbinic tradition if not the Karaites and Samaritans with whose calendars I’m less familiar) also uses month names from the Babylonian calendar, and 1 Nisan (א׳ בניסן) is one of the four Jewish New Year’s Days (as the Jews have one in each of the four seasons). Although the autumnal New Year’s Day (Roʼsh hash‐Shana ראש השנה) has eclipsed the others, the springtime one was the principal one in antiquity and is still the principal one among the Karaites today.

So today is 1 Nisan on both calendars, which usually don’t coincide so precisely.

Published by Elyaqim Mosheh Adam at 05:55 No comments: Links to this post