On 8 October 2008, I used my broken-down, misbehaving camera to snap the above photograph of a truck parked in front of Apna Bazar Cash & Carry, 72-20 37th Avenue, Jackson Heights, a market I curiously and unrelatedly mentioned in my last article. In bright sunlight, my camera tends to turn skies pink, and it also tends to make straight lines wavy near the edges of the images. (Note the awning.) The pretty graffiti on the truck said something rather unusual, “Acne Lions,” so I wondered if I might find better pictures of it online. My search was surprisingly fruitful, and I turned up six other pictures of it, spaced in time so the development of the different graffiti is somewhat demonstrated. 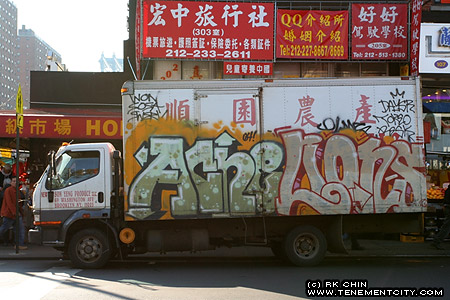 The second earliest was the picture above, embedded here with a link to the page on which I found it, taken by Robert K. Chin on East Broadway, Manhattan, on 2 November 2006 when some of the upper graffiti had not yet been painted.

I found all of the remaining five images on Flickr. There may be yet more pictures to be found, but I do not know like what the other side of the truck looks.

Published by Elyaqim Mosheh Adam at 04:50 No comments: Links to this post